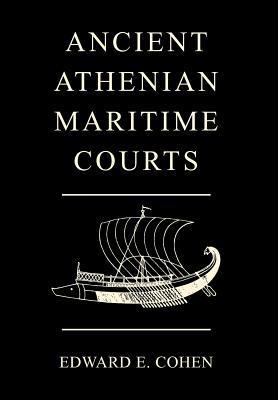 Athens was the dominant maritime power in the West from the eighth to fourth centuries BCE. Athenian preeminence insured that its maritime law was accepted throughout the Mediterranean world. Indeed, its influence outlasted Athens and is the only area of classical Greek law that wasnt replaced entirely by Roman models. Codified during the Roman period in the Rhodian Sea laws, it went on to influence the subsequent development of European commercial and maritime law. Using both ancient and secondary sources, Cohen explores the development of Athenian maritime law, the jurisdiction and procedure of the courts and the Athenian principles that have endured to the present day.

He successfully treats the much-discussed problem of why they were termed monthly and describes how supranationality was a feature of all Hellenic maritime law. He goes on to show how their jurisdiction was limited ratione rerum, not ratione personarum, because a legally defined commercial class did not exist in Athens at this time. Edward E. Cohen, an attorney with a Ph.D. in Classics, is both distinguished historian of Classical Greece, Professor of Ancient History (adjunct) at the University of Pennsylvania and the Chief Executive Officer of Atlas America, a producer and processor of natural gas.

His other books include Athenian Economy and Society: A Banking Perspective (1992) and The Athenian Nation (2000). Cohens competence in the history of law, his own experience as a practicising lawyer with a Ph.D. in Classics, and his belief that in the principles of Greek maritime commerce reside the germinal cells of the complex modern international law of maritime commerce (p.

5), ought to have won for this book a much wider audience than it is likely to have. (...) As the most detailed treatment of Athenian maritime law Cohens valuable book must be given a place beside the important contributions of his predecessors, Paoli, Calhoun, and Gernet.: Ronald S. Stroud, American Journal of Legal History 19 (1975) 71. A] learned and precise examination of certain terms and procedures associated in the fourth century B.C. with lawsuits that arose out of Athenian maritime commerce. (...) Argumentation throughout is responsible.

Cohen knows the sources and has read critically in a wide range of secondary material. The book is a valuable addition to our understanding of a comparatively little known area of Athenian law.: Alan L. Boegehold, The Classical World 69, No. 3 (Nov., 1975) 214.