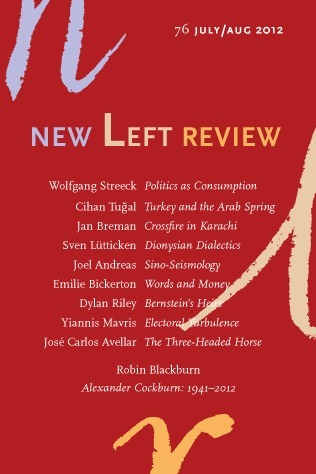 Cihan Tuğal takes a cool look at the Erdoğan government’s domestic and foreign-policy record, from ‘zero problems’ diplomacy to the blockade of Libya and dirty war on Damascus, airstrikes on Turkish Kurds and silence on Bahrain.Wolfgang Streeck: Citizens as CustomersPost-Fordist capitalism has transformed consumers’ expectations, offering limitless diversification of commodities. Wolfgang Streeck explores the implications for a public sphere which cannot hope to match the cornucopia of the market.

The consumption of politics by the politics of consumption?Jan Breman: The Undercities of KarachiPakistan’s turbulent metropolis as battleground for gangsters and politicians, and the iniquitous rural order that propels impoverished haris to its slums.Robin Blackburn: Alexander Cockburn, 1941–2012A tribute to Alexander Cockburn—director of CounterPunch, Marxian environmentalist, long-standing editor of New Left Review.

Robin Blackburn traces his path from County Cork to Soho, Havana to Manhattan, the Florida Keys to California’s Lost Coast.Alexander Cockburn: DispatchesReports from Paris and Moscow on the bicentenary of 1789 and dissolution of the USSR—mitterandistes hailing the Girondins as forerunners of themselves, while Yeltsin thanks George Bush for his support—and lethal advice for Western foreign correspondents.Yiannis Mavris: Greeces Austerity ElectionSocial and demographic analysis of the May and June 2012 polls, as the country reels under EU structural adjustment.

Narrow basis of Samaras’s ‘national’ government, DIMAR’s defection and emergence of SYRIZA as a new force on the left.José Carlos Avellar: The Three-Headed HorseEchoes and parallels between the work of Eisenstein, Picasso and Orozco in the late 1930s. The recurring spectres of war, conquest and destruction stalking the world from Moscow to Guadalajara to Guernica, travelling back and forth between film, wall and canvas.BOOK REVIEWSSven Lütticken on Asger Jorn, Fraternité Avant Tout. The Danish artist and Situationist wrestles with Engels and Nietzsche.Joel Andreas on Martin King Whyte, Myth of the Social Volcano.

Empirical survey of attitudes to inequality in the PRC, offering comfort for Beijing.Dylan Riley on Sheri Berman, The Primacy of Politics and Ashley Lavelle, The Death of Social Democracy. Conflicting assessments of Bernstein’s legatees and the future of a reformist left.Emilie Bickerton on Thierry Discepolo, La Trahison des éditeurs. The Hexagon’s ‘quality’ book trade skewered by a leading radical publisher.