The German Way of War: From the Thirty Years War to the Third Reich Robert M. Citino 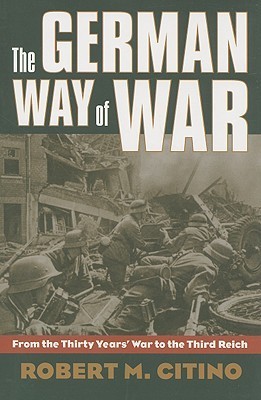 Along the way, he underscores the role played by the Prussian army in elevating a small, vulnerable state to the ranks of the European powers, describes how nineteenth-century victories over Austria and France made the German army the most respected in Europe, and reviews the lessons learned from the trenches of World War I.Through this long view, Citino reveals an essential recurrent pattern--characterized by rapid troop movements and surprise attacks, maneuvers to outflank the enemy, and a determination to annihilate the opposition--that made it possible for the Germans to fight armies often larger than their own.

He highlights the aggressiveness of Prussian and German commanders--trained simply to find the enemy and keep attacking--and destroys the myth of Auftragstaktik (flexible command), replacing it with the independence of subordinate commanders. He also brings new interpretations to well-known operations, such as Moltkes 1866 campaign and the opening campaign in 1914, while introducing readers to less familiar but important battles like Langensalza and the Annaberg.The German way of war, as Citino shows, was fostered by the development of a widely accepted and deeply embedded military culture that supported and rewarded aggression.

His book offers a fresh look at one of the most remarkable, respected, and reviled militaries of the past half millennium and marks another sterling contribution to the history of operational warfare.

Comments
Comments for "The German Way of War: From the Thirty Years War to the Third Reich":