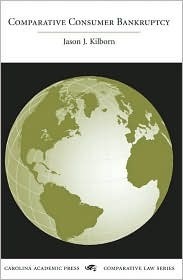 Drawing on both primary sources of formal law and empirical studies of the law in action, this book offers an overview of how the law of consumer overindebtedness has played out in the last two decades in the United States and Europe and where it appears to be headed today. While the focus here is on law and practice, the questions for discussion at the end of each chapter might spawn deeper theoretical and policy explorations of the ambivalent relationship of societies to their financially overextended consumers and the ambiguous state of contract law in the consumer context in the 21st century.Chapter 1 sets the stage by introducing the challenges and methodology of a comparative approach to this area of the law.

Chapter 2 explores the varying form and role of credit counseling and pre-bankruptcy negotiation with creditors in the various systems presented. Chapters 3 and 4 compare and contrast the form and function of the formal consumer insolvency systems in the United States, France, Germany, Austria, England & Wales, the Netherlands, Sweden, Belgium, and Luxembourg.